The health office is staffed by a full time RN and a part time health aide. The nurse is available to administer medical assistance and first aid and dispense medication as directed by the physician and parent to students during the regular school day.  She will develop individual health plans for students with chronic health conditions or handicaps. We maintain health records and make sure all state required physicals and immunizations are up to date. We will perform state mandated health screenings for vision, hearing, and scoliosis. Please notify the nurse of any health updates throughout the year. If there is any medical information you would like the nurse to be aware of, please feel free to contact her.

Please consider vaccinating your child. It is always better to prevent a disease than treat it.

Remember that any child who is not vaccinated against a vaccine-preventable disease will be excluded from school per the Religious/Medical Exemption Form.

"I understand that during a vaccine-preventable disease outbreak at the above-identified school,
all susceptible children, including the student will be excluded from school if a public health
official determines that the school is a significant site for disease exposure, transmission and
spread into the community. In such case, such children, including the student shall be excluded
from school until: (1) the public health official determines that the outbreak danger has ended;
(2) the child becomes ill with the disease and completely recovers from it; (3) the child is
vaccinated according to public health protocol; or (4) the child has proof of immunity to the
disease."

Measles: Outbreak and Control of Disease

Measles is an acute illness caused by a virus. It is characterized by fever (as high as 105°F) and malaise, cough, nasal congestion, and conjunctivitis, followed by a maculopapular rash. Measles is highly contagious and spreads through coughing and sneezing. Measles is usually a mild or moderately severe illness. However, it can result in complications such as pneumonia, encephalitis, and death. Approximately one case of encephalitis and two to three deaths may occur for every 1,000 reported measles cases.

The average incubation period for measles is 11–12 days, and the average interval between exposure and rash onset is 14 days. People with measles are usually considered infectious from four days before until four days after onset of rash with the rash onset being considered as day zero.

From January 1 to April 26, 2019, 704** individual cases of measles have been confirmed in 22 states. This is an increase of 78 cases from the previous week. This is the greatest number of cases reported in the U.S. since 1994 and since measles was declared eliminated in 2000.

Reasons for an increase in cases in some years:

The declaration of endemic measles elimination in the United States was made in 2000. The key challenges to maintaining the elimination of measles from the United States are ● vaccinating children at age 12–15 months with a first dose of measles, mumps, rubella (MMR) vaccine; ● ensuring that school-age children receive a second dose of MMR vaccine; ● vaccinating high-risk groups, such as health care personnel and international travelers including infants 6 to 11 months of age; ● maintaining measles awareness; and ● working with U.S. Government agencies and international agencies, including the WHO, on global measles mortality reduction and elimination goals.

According to the latest information released by the Connecticut Department of Public Health, “A disease outbreak is less likely to occur at schools where high numbers of students are immunized. Known as Herd Immunity, when almost all the children have immunity, a disease is much less likely to appear at the school and infect children who have not been vaccinated...This is especially important for medically fragile children. Some children have conditions that affect their immunity, including illnesses that require chemotherapy or drugs that suppress their immune systems. These children cannot be safely vaccinated, and at the same time, they are less able to fight off illness when they are infected.”

Click here to read the CDC’s Manual for the Surveillance of Vaccine-Preventable Diseases: Measles 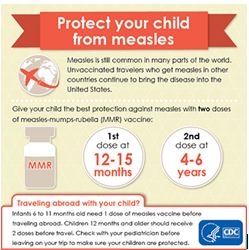 The best way to protect against measles is to get the measles-mumps-rubella (MMR) vaccine. For prevention of measles, two doses of MMR vaccine are recommended routinely for children, with the first dose at age 12 through 15 months and the second dose at ages four through six years (school entry). The MMR shot:

What are the side effects? Most children don’t have any side effects. The side effects that do occur are usually very mild, such as a fever, rash, soreness or swelling where the shot was given, or temporary pain and stiffness in the joints.

For prevention of measles among adults, two doses of MMR vaccine are also recommended for adults at high risk, including international travelers, college and other post-high school students, and health care personnel. All other adults, born during or after 1957, without other presumptive evidence of measles immunity, should be vaccinated with one dose of MMR vaccine. Children 6–11 months of age who travel internationally should receive one dose of MMR vaccine optimally at least two weeks prior to travel. 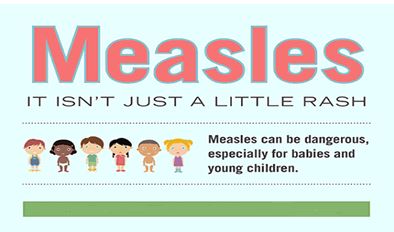 The School-Based Mobile Dental Program is offered here at Westbrook Public Schools for the benefit of the students.

Enrollment is accepted year around, and once enrolled it remains active until high school graduation.

In fact, if you move to another town where CHC provides school-based services, your enrollment will continue.

To begin receiving services, please go to www.SBHC1.com  to sign up quickly and easily online!

Or print and complete the enrollment form found here. Please note all parts of this registration/enrollment form must be completed, signed and returned to the School Nurse or the School Main Office before your child can receive services:
Download the form in English or in Spanish

For further information on getting a student enrolled or to un-enroll a student please contact:

Students will be automatically dismissed for:

If dismissed for fever, diarrhea, and fever, the student must remain out of school until they are symptom free for at least 24 hours without the use of medication to suppress symptoms.

If the student is dismissed for suspected conjunctivitis (pink eye), the nurse may require a doctor's note  in order to return to school.

If the student is diagnosed with conjunctivitis (pink eye), the student must remain out of school until they have completed a full 24 hours of antibiotic medication.

If lice are discovered, the student may return to school only after confirmation of hair treatment is completed, every viable nit is removed, and the nurse has assessed the student to verify the student is free of lice/nits.

Get real time school updates on your mobile device with eChalk Notify.

Connect with code SNTI0V to get instant alerts or log in with your eChalk user account for the latest updates from all your classes and groups.